Gotahold Brewing Posted on July 13, 2020 Posted in Uncategorized No Comments

I grew up with racism all around me. I’m not proud of my heritage or words I’ve said, jokes I’ve made, actions I have taken.  The verse Jason Isbell and the 400 Units song “White Man’s World” hits very close to home for me:

I’m a white man looking in a black man’s eyes
Wishing I’d never been one of the guys
Who pretended not to hear another white man’s joke
Oh, the times ain’t forgotten
There’s no excuses and never enough apologies for the shame I feel now.

In 2001, I was in a vehicle pulled over just outside of Flagstaff, AZ by a Coconino County Sheriff. It was obvious by the officers actions and questions, it was a case of racial profiling. The driver, who is Mexican-American, had been targeted enough worked hard to keep me calm. I was outraged. It wasn’t the last time I witnessed racial profiling by police. I am equally outraged every time. 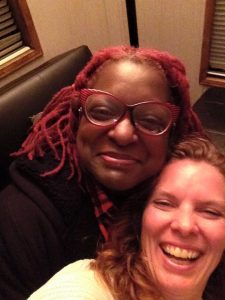 Years later, a yoga student who became a friend, share really ugly stories about her experiences growing up black and queer in Springfield, MO. She was not happy I moved to the Ozarks. Daily, I see rebel flags and few people of color where I live, which is a town of considerable liberal, highly educated people.

There’s so much work left to be done before as Bob Marley once sang:

Until the philosophy
Which hold one race superior and another inferior
Is finally and permanently discredited
And abandoned
Everywhere is war
That until there no longer
First class and second class citizens of any nation
Until the color of a man’s skin
Is of no more significance than the color of his eyes
That until the basic human rights
Are equally guaranteed to all
Without regard to race
That until that day
The dream of lasting peace,
World citizenship
Rule of international morality
Will remain in but a fleeting illusion to be pursued,
But never attained
Now everywhere is war
War

Standing Up For Change

I know brewing a beer and donating the proceeds to NWA Urban League Young Professionals isn’t enough to make a change in generational trauma. I know it’s going to upset some people who walk in and see the Black Is Beautiful tap handle. Sadly, there are still too many people who can’t see beyond the surface to see what lies in the depths. I won’t lie. I’m scared. Hate runs deep and change is hard. Right about now, there are a lot of people who are so entrenched in hate that they’re a bit like a rattlesnake backed into a corner, fighting for its (way of) life. I cannot sit silently or be paralyzed by this fear. Too much is at stake.

“There’s no such thing as someone else’s war
Your creature comforts aren’t the only things worth fighting for
You’re still breathing, it’s not too late
We’re all carrying one big burden, sharing one fate” -Jason Isbell, “White Man’s World

I do not think this is merely a police issue. I have known many law enforcement officers in my lifetime and I know they aren’t 100% racist. They have a very difficult job. I’ve seen really good-hearted people become jaded and cynical as a result of the job they do, some of whom were police. However, abuse of power is never excusable. Ever. Doesn’t matter what your job is, it’s not okay.

My mentor, Seth Godin, wrote on his blog:

“When people deprive others of education and opportunity, they’re not helping themselves, they’re depriving themselves of the benefits that would come from what others would end up contributing. We don’t benefit from treating others poorly, we pay for it.”

Black Is Beautiful is the first beer I’ve helped to brew here at Gotahold Brewing. For me, brewing this beer is an apology for my great-grandfather who was in the KKK, for all I have done knowing and unknowingly with my white privilege, and a way to stand united with a community. While this says Black Is Beautiful, I would add brown is, too. In our country, all people of color deserve the same respect, dignity, rights, and opportunities. Perhaps as we are willing to recognize that, together we can tackle issues such as poverty, education, health and health care that proportionality affect financial impoverished communities.

Together we are better. I know this is only a tiny pebble being thrown into the ocean, but hopefully it will inspire others to create their own waves.