Gotahold Brewing Posted on February 26, 2021 Posted in Uncategorized No Comments

Berliner Weisse is an intriguing style of beer. At slightly over 3% alcohol, the style has a light color and aroma profile with a flavor and mouthfeel that are dominated almost completely by a very sharp, almost extreme sourness. The acidity is so overwhelming to the other characteristics of the beer that it is traditional in Berlin to serve the beer “mit Schuss” or with a shot of flavored syrup, typically syrups flavored with Raspberry or Woodruff, an herb that tints the syrup green.

When I was a younger brewer, it was occasionally possible to find bottles of unadulterated Kindl – one of the few remaining brands – in beer stores here in America that carried a lot of imports, but during my visits to Berlin I only encountered bottles that were pre-mixed with syrups. It’s a shame, because while the beer is a bit much for those unaccustomed to sour beers, the low alcohol content, spritzy carbonation and sharp, lactic sourness make Berliner Weisse perhaps the most quenchingly refreshing beers out there.

Napoleon’s troops, on their way to annihilation in Russia, supposedly donned these beers “The Champagnes of the North.” (This is a story I’ve heard a couple of times. It was never clear to me if this was (a) a compliment, left-handed or otherwise, and (b) true. But I digress.) Historically, this beer has roots back about 400 years, and was during the 19th Century the most popular style of beer consumed in Berlin with over 700 breweries making the style (Wikipedia). One can wonder how such an anomalously sour style could gain such broad acceptance. One guess is that it had a consistency to it that other brews at the time might have had a difficult time emulating.

Running these beers through the brewhouse is fairly straightforward. The grist is typically a 50-50 blend of Wheat Malt and Pilsner Malt, scaled to yield a wort of about 7-8% sugar content. I’ve heard that historically this style wasn’t always completely boiled, but we elected to run a full 60 minute, vigorous boil. Hopping is light – we used Hallertau to achieve approximately 6 IBU – an amount that should not significantly impact the flavor. The interesting part is in the fermentation. We ran some trial batches in the pilot brewery to figure out the best way to yield the product we were looking for, which as I recall from our discussions with the Natural State team included a “knife-like sourness.” We ended up eschewing the kettle-souring we’d initially planned for a new process – a yeast culture that produced sourness and alcohol at the same time in the fermenter. This is where I get back to consistency.

When this style was developed and flourishing, brewers didn’t exactly have a firm grasp on the microbiological agents that did the heavy lifting of turning sugars into alcohol. They would have grasped that adding back some of the lees (settled solids) from one batch to the next made the process move along faster, one guess at the prominence of this style is that a mixed culture of yeast and bacteria – and the breweries in which it circulated – was capable of producing a consistent product. It may have been sour – but it was consistently and predictably sour, which Berliners eventually took to and made their own.

A couple more notes about this beer: 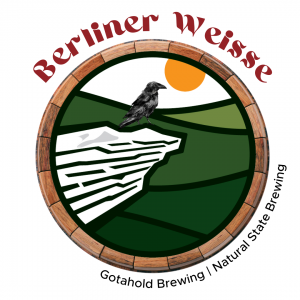