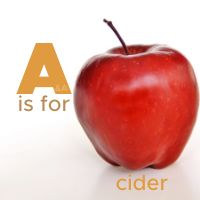 Farmhouse cider has a long history in this country. In the pioneering days, many farms would have at least some apple trees, and much of the fruit from these trees would be pressed into juice and fermented into cider. Arkansas allows its breweries to produce cider, and we’re happy to work with A & A Farms in Berryville to get some cider on draft and put up in barrels this autumn.

Cider is often lumped in with beer because it has a similar alcohol content (typically 5-6%) and shows up on draft in bars and in six packs in stores, but in terms of production it has more in common with wine. The quality of the final product is fairly tightly linked to the quality of the fruit it is made from, and the process – pressing, fermenting, aging – is the same as that of wine.

John, the owner of A & A, recently gave me a tour of his orchard, showing off numerous prized cider apples he has planted and we’re looking forward to potentially using to make world-class cider once these trees start to bear significant amounts of fruit. Winesap, Wickson’s Crab, Virginia Crab, Esopus Spitzenberg, Ashmead’s Kernel, Arkansas Black – apples with a lot of character. Beyond the flavor of the fruit, character in apples depends on tannins (which provide body) and acidity, which provides a brite sharpness to the cider. For this year, we’ll be doing a pilot batch or two, working out the kinks while (hopefully) making some worthy cider from this year’s crop.

Most hard cider you can buy is on the sweeter side – typically sugar or sweet cider is added at the end of the process to add some sweetness back to the product. Unlike with beer, where some of the sugars made from the grain are unfermentable and thus give the beer body and some low-level sweetness, all of the apple’s sugars are fermentable. Thus, unless sugar is added to “back-sweeten” the cider, it would naturally be dry. Our preference at Gotahold is towards a more natural product, and we’ll be looking to ferment and serve the cider dry, and to give it some balance by encouraging a somewhat wild fermentation. Lactic acid bacteria will give the cider a bit of extra sharpness, and a mixture of farmhouse yeasts will give the cider some interesting flavor notes. We’ll be looking to age the cider in oak barrels. The time in oak should mellow the cider, and the wood should give up some tannins and oaky flavors which will give the cider some body and balance in much the way oak rounds out many wines.