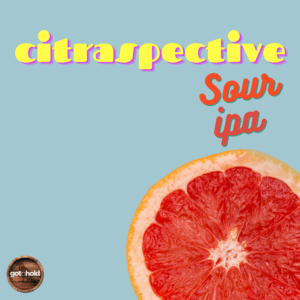 Citrapective is a Sour IPA – a style that combines the lactic sourness of a kettle soured beer with the lovely aromatics of a dry-hopped IPA. While it might seem at first to be an odd admixture of styles, it does combine into one beer two of the things we most love to embue in our beers: a quenchy, refreshing sourness and the fruity, juicy goodness of American hops.

We first brewed this beer way back in the summer of 2020, which seems like a very long time ago. (It’s almost like pandemic years are dog years, isn’t it?) As a new brewery operating in uncertain times, this was maybe not the ideal time to be transmogrifying beer styles, but this one seemed to work for quite a few people, and as time has gone on we’ve had a lot of “When are you making that one again?” (Wendy inserting her two cents here- I didn’t ask when, I merely said definitively it WILL be on the line up this year because it’s that good) Warmer weather approaches, and it’s time for some more refreshing brews.

We like making sour beers because the construction of the flavors can be so different than it can be with a traditional beer. Beers that are not soured traditionally ride on a teeter-totter that must balance sweetness and bitterness to have drinkability. Beers with more sweetness (such as barley wines) must have commensurately more bitterness, or they’ll come across as cloyingly sweet. Furthermore, there are a number of flavors that generally seem to work well in traditionally brewed beers, but the working combinations are limited.

Sour beers have a different point of balance. Strong bitterness doesn’t generally work well contrasted against tart flavors, but the sourness can provide its own contrast with sweeter flavors given to the beer by malts or fruits. Different flavors such as herbs and teas seem to flourish in sour beers in a way that they don’t in traditional, non-sour beers. Fruit really shines in a sour beer, generally much more so than in a traditional beer. Plus, they’re fun to drink and refreshingly thirst quenching during the warmer months of the year.

Citraspective was brewed from barley and wheat malts, and fermented with a mixed culture  that yielded a medium sourness that comes across more lemony and citric than lactic. There are no IBUs since we added all the hops to the fermenter, but the beer has bit of bitterness that reminds us more of grapefruit than hops. We double dry-hopped it; both times with Citra to infuse those citrusy juicy flavors we all love.