The first iteration of what we anticipate as an ongoing collection of beers is a bourbon barrel-aged Stout, clocking in at 12.2% ABV. The base beer was a big, roasty stout that we fermented in stainless, then split into 3 different barrels for aging. For this particular project, we chose a Jim Beam barrel, a Heaven Hill barrel and lastly a new (unused) barrel that had been built and charred to hold Bourbon, but instead came straight to us.  Of course we sampled the beer in all the barrels before blending – such are the joys and privileges of working in this business.

To the Jim Beam barrel we added a pound of NuJava French Roasted coffee beans.  The beer from this barrel had a big coffee note – my first thought was maybe it was too big and the coffee flavor would be overly prominent in the final beer (thankfully, it wasn’t). It also had delicious bourbon notes – woody, vanilla-y, boozy notes that melded amazingly well into the base beer.

The Heaven Hill barrel received a pound of cacao nibs at filling to add some chocolatey complexity to the blend. This barrel was definitely the best of the three as a stand-alone beer. The cacao flavor was there, but it was melded perfectly with the roastiness of the base beer and the whiskey notes the barrel had donated.

We just added the base beer to the unused whiskey barrel with no additions – we wanted to see what sort of flavors we’d pick up just from the charred wood innards of the barrel given a sufficient rest. The beer that emerged had strong notes of vanilla and coconut – more than I prefer – although I’ve had beers good beers with more of each of those flavors. There was also a slightly astringent note I attribute to the char of the wood. We elected to only use slightly more than half of the beer from this barrel for the overall blend, the rest we’ve reserved for another beer TBD.

We really like the blended result. I don’t think I’d pick out the coffee notes if I didn’t know to look. Vanilla and coconut are there, but don’t overwhelm the other flavors. There’s a nice mouthfeel – full and a bit oily, but there’s enough alcohol that the flavor impact melts away after a few delicious moments.

This beer – like all the beers we’ll be making that are worth saving for a special occasion – will be packaged in glass bottles. Cans are great beer containers – they’re light, they do a good job of protecting the beer from light, and best of all you can bring them places you wouldn’t bring bottles: on the beach, on the trail, on the boat, etc. We can most of our beers, but for a beer you might put in a bottle rack and hold onto for a year before drinking – like this one – we think bottles are the way to go. 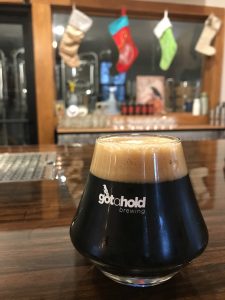