In Bavaria, where I lived and worked for a spell, I was introduced to the concept of “Brotzeit,” the literal translation of which is “bread time,” but was in fact a mid-morning break that generally included beer. The term ‘Brotzeit’ is a bit tongue-in-cheek, but in that part of the world beer is an important part of most meals; equivalent to having bread on the table. It is in that spirit that we’ve named this beer.

Beer has a great deal in common with bread. For starters, both are made from grain. The production of bread and beer are thought to be the reason ancient hunter-gatherer types settled down and built cities and towns. Both are great accompaniments to meals. Beer can showcase many of the same flavors – grainy, toasty, chewy, nutty – that are found in great breads. Daily Bread, the name we’ve chosen for this beer, alludes to the sustaining role that bigger, maltier beers can play during the colder months. As a Doppel (or double) Bock, this beer can certainly fit that bill.

Doppelbocks are rich, malty lagers that are seasonal specialties in Bavaria. In the south, around Munich, Bocks and Doppelbocks are spring beers, typically showing up in March or thereabouts. Typically a deep amber to brown, the beers feature a rich, chewy texture – the definition of full-bodied. The flavor profile is dominated by malt flavors, coming across as toasty, malty and on the sweet side, with some mild roastiness in the background. The alcohol is typically in the neighborhood of 8%. Around Bamberg, where I lived and worked, Bockbiers were released in the Autumn and consumed during the winter months. Bocks were the most important seasonal release, with each brewery typically hosting a party to celebrate tapping the first keg. 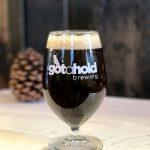