Farmer Tan is a nitro stout brewed to bring a complex, fully roasty and malty taste profile with a forgivingly summery alcohol content of just 4.9% ABV. Our recipes are typically fairly simple here at Gotahold, this one had a notably large variety of grains; some caramelized, some roasted and some kilned to an espresso bean-like blackness. We incorporated some unmalted grains and ran a fairly high-temperature mash to give the final beer a nice full mouthfeel. Nitrogenation and dispensing through a specialized stout faucet give the beer a lovely silky smoothness and a rich, thick tan head. 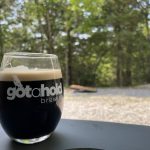 A little bit about Nitro beers…

The smart folks at Guinness invented Nitrogenated beers (Nitro for short) back in the 1950s or 60s as a way of emulating traditionally cellared and served cask stout, which at the time was being phased out. If you’ve ever been to a pub in Britain, you will have seen the bartender pouring beer using a Beer Engine – a hand pump mounted on the bar that actually pulls the beer up from the cask in the cellar and pumps it into your glass. Beer served in this fashion can be truly amazing, but it’s also time consuming and requires a very skilled publican (bartender) to make sure the beer is properly prepared. It is also tends to go stale very quickly. For all these reasons, there was pressure on British breweries and pubs to move away from traditional cask dispense into more modern keg dispense, where the beer is pushed from the keg to the taps using carbon dioxide pressure. The Guinness folks came up with a great solution: dispensing with Nitrogen. Nitrogen dissolved in beer gives a much smoother mouthfeel, and additionally when dispensed correctly, it will form a very thick and lasting head of foam.