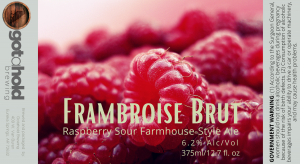 This beer is an approximately 60:40 blend of a Brettanomyces-fermented wheat beer and a golden sour, the two beers were blended and pitched with a sour culture and refermented with Raspberries.

The resulting beer combines the bright fruitiness of fresh berries with the nuanced funkiness of a great Brett beer. A moderate acidity sharpens  and brightens the flavors without tipping the beer over into full-on, puckery sourness.

We filled barrels with different “project” beers over the last twelve months – our first twelve months of existence as a brewery, and of course we continue filling barrels with beer for the months and years ahead. Many of those filled in year one were wine barrels pitched with hope and love and some funky strains of yeast and bacteria. This project combined a very funky Brett Beer with a medium sour beer that picked up some lovely oak notes during approximately 10 months on the wood. We tied the blend together by refermenting the combined batch with a fresh lactic culture and raspberries. The resulting ferment consolidated the disparate flavors into a unified and balanced beer.

This one will be available in VERY limited quanities: 375 ml bottles and some draft at the brewery. We packaged it with yeast, so it should continue to improve over the next year or so for those with patience and the inclination to put up a few bottles in the cellar.