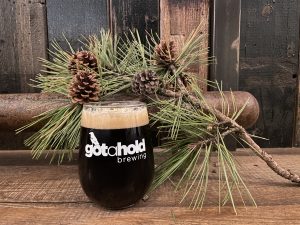 This aroma and flavor profile of this beer lies on the continuum between Porter and Stout, so to really describe what we were trying to achieve here, it seems worth talking a little bit about those two styles, and the differences between the two.

As I recall reading, Porter originated as a British style and was quite popular for a time (this was the 1800s). Beers known as “Stout Porters” (bigger, bolder versions) evolved out of the original and were eventually just shortened to “Stout.” Different variations of Stout thrived and evolved, eventually surpassing and nearly extinguishing Porter as a style of beer, but with the rise of craft brewing in America and the UK, they are now fairly popular again. But how do they differ in terms of drinking experience?

There is a lot of cross-over between the two Styles, but on the whole, Porters are made to have milder, smoother flavor profiles than Stouts, which typically include more darkly roasted grains that give the beer strong coffee, roasty, sometimes verging on burnt/smoky flavors. It’s likely that Porter came first as a style simply because the technology for roasting grains was fairly primitive when Porters came to prominence. Some of the grains we use to brew Stouts are easily as dark as the darkest roasted coffees, and roasting anything that deeply is tricky, as you’re taking it nearly to the point where it wants to catch on fire. That’s tough to do consistently without good instrumentation and roaster design, something that was absent in the 1800s. So early Porters would have included a fairly large amount of mildly roasted grains. By contrast, Stouts often contained a smaller proportion of roasted grain, but were darker and more roasty because those grains they did use were much more intense in the flavors they give.

Thus the differences in flavor. Porters tend to be dark and rich, but typically with a mild, nutty and mildly roasty flavor, often highlighting chocolate-like notes. Stouts, on the other hand, tend to have much more roasted character, with espresso-like coffee, dark chocolate and a slightly burnt character. Smoky notes sometimes come into play with stouts, simply due to the near-combustion processing of the grains. As with darker coffee, there is often more bitterness in the flavor of the stouts than there would be with the milder Porter, a result of the roasting process.

The recipe we designed for Lima Lima was that of a Porter: a large proportion of the grain was mildly roasted malts such as Brown, Caramel, Chocolate and Munich Malts. To this base, we added a small amount of Roasted Barley, to give the beer just a hint of that intensely roasty, stout-like quality. The result is a beer with coffee hints in the aroma, but a nice smooth, roasty brew; dark, rich and drinkable.