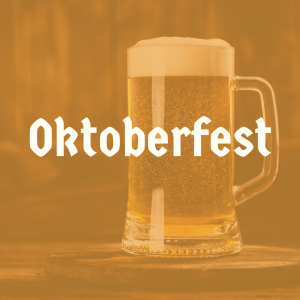 Oktoberfest beers, also sometimes called Marzen beers, seem to me like a throwback to a simpler time. In the craft beer market today (Gotahold included) a lot of what we do is complex both in production methods and taste profile. For example: IPAs that include nuances from adding exotic hops at various times during the process; Sour beers that involve multiple step fermentation’s, non-standard beer additions like fruit and spices; beers aged for months or years before selling. Oktoberfests, by contrast, are simple, malt forward lagers. When well-made, these aroma and flavors of these beers are very straightforward and determined almost entirely by the ingredients used in the making.

Ours is true to that ideal. We started with a malt recipe heavy in Munich Malt, which gives those lovely malty and toasty aromas that show so well in a beer like this. Beyond that, we added some other malts to accent the overall mouthfeel and flavor profile and finished it with a subtle hopping for a bitterness that serves to balance the residual sweetness of the malts. The end result has a lovely tawny color, an aroma and flavor profile dominated by malty and warm toasty flavors, and a full mouthfeel that is slightly chewy. This beer should be amazing with most meats, with roasted vegetables and just about anything else that might come off a grill.