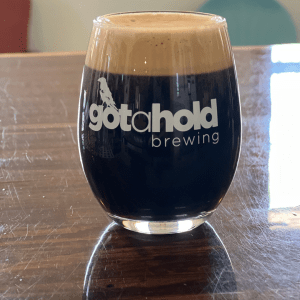 We brewed a rich and roasty stout in our pilot program and infused it with cold-brewed coffee from our friends at NuJava. The result is a silky smooth stout with beautiful coffee notes. To pay homage to the great Irish stout tradition at St. Patrick’s Day, we’re serving this beer nitro-style, giving a rich lasting tan foam atop the deep blackness of the beer in the glass that perfectly complements the roasty smoothness of the brew.

Irish beer has long been synonymous with stouts – most notably the stout first brewed by Arthur Guinness in 1759. Intriguingly, the reason for this revolves around water and taxes. Why water? Why taxes?

The water in Dublin is famously chalky. This chalky water has a mild but important alkalinity which can cause some serious difficulties in trying to brew lighter colored beers. Arthur Guinness couldn’t have known why when he brewed his first batch, but dark beers just work better with such a water supply. The reason is a natural acidity that derives from the roasted grains. This mild acidity balances the mild alkalinity of the water, yielding a balanced and satisfying beer.

Brewers have long been subject to taxes for simply making their wares, and in 18th century Ireland and England, the brewers were taxed at a rate that was commensurate with the amount of malt that they used to brew their beer. The more malt, the higher the tax that they paid. This led to some creative non-malt substitutions. In the case of Guinness and other Irish Stouts, the brewers began to incorporate grains that were unmalted, and thus did not increase the tax rate. Roasted barley and unmalted barley that has been rolled like oatmeal have long been incorporated into these beers, yielding a uniquely roasty brew that has a smooth taste that can almost be described as oily due to the coating mouthfeel. The beers are notoriously rich even at lower alcoholic strength.

We added to an Irish Stout base cold-brewed coffee from our good friends at Nujava. This process gives a lovely coffee aroma and flavor without extracting much of the natural bitterness of the beans. This melds wonderfully with an Irish Stout.