Gotahold Brewing Posted on March 29, 2021 Posted in Uncategorized No Comments

Segal Double is a hazy and juicy Double IPA clocking in at 8% ABV and featuring tropical/citrusy notes a full and smooth mouthfeel and a mild balancing bitterness. The hops featured in this brew come from a friend’s hop farm in Washington.

For a very long time, American hops were used for one thing: bitterness. If hop flavor and aroma were to be part of a beer’s flavor profile, the brewer would employ hops from Europe for a very simple reason: American hops were considered inferior. When I started out as a brewer in the early 1990s, this had just barely begin to change. While brewers like Sierra Nevada and Anchor were making beers featuring the bolder aromas found in American hops like Cascade and Chinook, most brewers still thought American hops had a “coarse” flavor, believing that more delicate and subtle notes found in European hops made better beer on the whole. British hops like Fuggles  and Goldings were used for Pale Ales and IPAs, and Lagers would always include the so-called Noble hops like Hallertau, Tettnang and Saaz. This is just how things were.

Fast forward to today, and much of the craft beer available is flavored by the bold, highly expressive and flavor forward American hops that used to be considered ‘coarse.’ American aroma hops have grown alongside American craft beer.

The growers at the Segal Ranch were pioneers in American aroma hop, starting in 1968 with a hop originally known as 56013 – a varietal bred at Washington State University – and later to be known as Cascade. This variety later became the most widely grown American hop, largely on the strength of beers like Anchor Liberty Ale – first brewed in 1975, and Sierra Nevada Pale Ale – first brewed in 1981 and the many brewers who were inspired by those early brews. Cascade hops feature a characteristically fruity, citrusy and slightly piney aroma.

Segal Ranch still grows amazing hops, and when they sent us a box of their prized cascades, we  decided to brew something special with them. This DIPA uses about 6 # per barrel hops, giving a highly juicy and fruity aroma. We pick up tropical notes (especially pineapple), as well as citrusy (tangerine, juicy orange) and melon-like notes. Hints of herbal hoppy flavors and a maybe touch of mint are in the background. 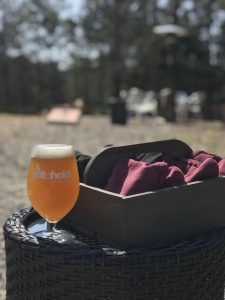