This is a beer I’ve been looking forward to bringing out of the barrels for many months. The beer does not disappoint. 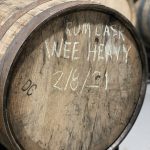 We laid down about half of the Wee Heavy we brewed last year in oak barrels we sourced from a rum distillery in Tobago, and after a nine month rest, Sir Brutus returns again, a beer transformed. The liquid that we barreled up in early February was a fairly classic Wee Heavy; big, caramelly notes with a lusciously sweet, malty and rich mouthfeel. The barrel-aged version is a much more balanced, nuanced and interesting beer.

The aroma has many of the notes you’d expect in a good dark rum: molasses to the fore and rummy, slightly raisiny aromatics complimenting the malty notes of the original beer. There’s also some happy surprises: a lovely spiciness, notes of oak and vanilla, a peppery-spicy note that reminds me of the black pepper notes found in a nice Syrah. Rum barrels are typically used many times before being rotated out by the distillery, so we don’t typically look for a lot of extractive flavors of oak.

The beer is no longer the caramelly malt bomb it was last winter. There’s still a sweetness in the flavor, and a richness, but the beer is decidedly drier and rounder, something I attribute to the time in oak and the alcohol contributed to the beer by rum that was suffused in the wood. The unoaked version was viscous and sweet, almost to the edge of cloying. Out of the barrels, this beer has a surprisingly nice mouthfeel; medium bodied with a nice alcoholic warming. I’m looking forward to pairing this beer with some wonderful meals this winter.