Gotahold Brewing Posted on July 18, 2020 Posted in Uncategorized No Comments 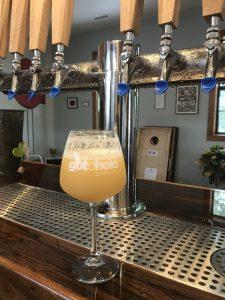 What we’re trying to accomplish with this one:

(a) lots of juicy, citrusy hop aroma and flavor

(b) medium alcohol, and a mouthfeel/body/basic taste profile that substitutes a lactic tartness where bitterness would normally hold sway against the sweetness of the malt

The idea of IPA as a beer moniker is really, really stretched, isn’t it? At this point, the beers of so many various colors, flavor profiles, and descriptions are somehow lumped into IPA that it really devalues the label. Really the only unifying factor for the IPA style is that hops are somehow important to  the flavor profile. In this case, I’ll be shooting for — at least technically — zero IBUs, although no doubt we’ll pick up some bitter flavors along the way from the copious deployment of hops during pretty much every stage of the brewing. But despite the lack of IBUs, this beer will use 3-4 # of hops per barrel. It’s a hop forward beer.

As per our general brewing philosophy here at Gotahold, the beer will have only as much alcohol as is necessary to make the flavor profile work, in this case somewhere in the 5-6 region, so we’ll be shooting for a starting gravity of about 13. We’ll be brewing hazy, because the haze helps us emulsify those lovely hop essential oils that please our olfactory so, thus the grist will contain a lot of wheat and some oats. And we’ll be looking for lots of hop aroma with minimal bitterness, and focusing heavily on Citra hops, because that’s what we’re looking for – Citra-ness.

We’re not really looking for a puckery sour here, we’ll do a mild lactic fermentation to a level I’d really describe more as ‘tart’, then ferment with a yeast that will give us a nice estery profile to meld with the flavors of the hops we’ll add. Dry hopping in two stages – some about mid-way through the ferment, and the rest once the ferment is done and the beer has been chilled.

I’m pretty thankful that New Belgium started making one of these recently, putting a commercially available, consistent example of a Sour IPA on the beer shelves nationally; something that should go a long way to bring it into the general conversation about great beer. It’s a style we started running into a few years ago, prominently at Hudson Valley Brewing up in NY, but I’m sure by now is fairly widespread in great breweries around the country. People like hops — that’s clear — and the trend of heavily hopped Double IPAs is a bit played out. More, with the evolution towards hazier beers and lower IBU IPAs, the door is open to adjust the balance to incorporate some lactic acidity. I also think there’s the possibility of incorporating all the things that have been tried in IPAs like fruit, teas and spices in ways that will really differentiate and make amazing beer.

The lauter went surprisingly well for a beer with as much malted and unmalted wheat as we used.  As noted above, we were shooting for 0 IBUs, so all of the hops were added post-boil, to a wort that was cooled below 180 F. We did a full, rolling boil, and then cooled the wort to 180 degrees. That lower temperature, as well as the reduced pH from souring – discourages bittering substances from ending up in the beer. The ferment proceeded well, and we were able to get this beer on tap over the weekend.

We really like the aroma on this beer, and how it plays with and through the flavor profile. The first whiff is heavy citrus notes, and taking another sniff you can identify tangerine, lemon and orange. There are also herbal notes in the background. The flavor is about as designed – the lactic tartness is a little lighter than expected and tastes more like a citric bite as from lemons. The flavor incorporates that lemoniness with oranges, and the finish is much more reminiscent of grapefruit, including the slight bitter bite one gets from the older, less kid-friendly varieties of the fruit.