Gotahold Brewing Posted on October 1, 2020 Posted in Uncategorized No Comments 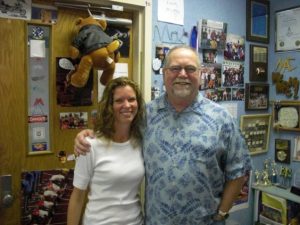 Mr. McClure was my gym teacher from 1st -4th grade. He was fun, though tough, and always fair. I never felt weak or a failure in his class. In fifth grade, I arrived on the first day of school to find he was no longer our gym teacher, but he was now my 5th grade teacher.

We were in what the military calls a barrack because there were too many students for the old school. He named it The Fort because he’d counted the steps and it was the furthest classroom from the principal’s office. He asked us to call him Mr. Mac. We knew we were part of something very special.

Scott McClure was a baseball player in college and a coach post college but he looked like a former football player. He was a state champion power lifter. Hi booming voice put the fear of God into you when you heard your last name called out followed by, “Come pick your punishment”. He’d fan out a deck of laminated, multi-colored card stock with various “punishments” and one “get out of jail free” card. I prayed for that card or the push-up’s because the alternative were swats and he was a strong dude even if he never gave it his all, it stung or as we’d say, “light you up!” I learned to do push-up’s and planks (cheater push-up’s) that year because I was constantly in trouble.

It was evident Mr. Mac loved us. He believed in us. In the neighborhood I grew up in, at that time, that was everything. I wanted to go to school and I loved learning from him. He made it fun. He taught us calligraphy. He wrote a poem about our class the day before Christmas break – a time most teachers are ready to pull their hair out. He’d found it while going through some old boxes and asked the school counselor who was a friend of mine to “share it with Reese”. I was mentioned and a few other classmates. It was clear by the poem he was having fun doing his job. It’s no wonder he won Teacher of the Year on a state level more than once.

One day, Mr. Mac found me alone in the classroom at recess crying. Some children had made fun of my body and it really hurt. I’ll never forget Mr. Mac’s talk to me that day. He planted a seed that would take years to grow, but when it did it would bear fruit for a lot of people, including myself.

I got my degree in Exercise Science and have spent 27 years in health and fitness. I think Mr. Mac had a lot to do with that and my love of teaching.

I had the honor of going back to to see him about 5 years ago. The old elementary had been torn down and a new one built. It was highly secured. After ringing the buzzer, I asked if Mr. McClure was still teaching there, that I was one of his first students in town for a visit and hoped to see him if possible. They they told me come in and asked my name. I could hear the secretary on the phone as she looked up with a puzzled look and said, “Yes, sir! Yes, sir, I’ll let her know.” When she hung up she told me how to get to his room and that he wanted me to know I’d be teaching the remainder of the math lesson. Math has never been my strong suit. Once again, Mr. Mac had put the fear of God in me even though I was now in my 40’s!

I co-taught with him for a bit before he stopped me. With a huge smile on his face, he said with such pride, “Class, do you know who this is? This is Wendy Reese. She has traveled the world and written a book. She’s doing great things.” I had no idea he knew all that. He must have read my face because he said, “Reese, I follow you. I’m proud of you.” Not half as much as I am of him.

Mr. Mac died on December 30, 2019. I’d wanted to invite him up to see the brewery and meet some of my students so they could know where I get my “You got this” attitude in fitness. While I am sad that won’t happen, I am thrilled we are naming this small batch, big-ass Imperial Stout in memory of Mr. Mac. It is hearty with light chocolate notes, smooth as a social studies (my fav) lesson, but at 10.5% it can light you up, for sure. 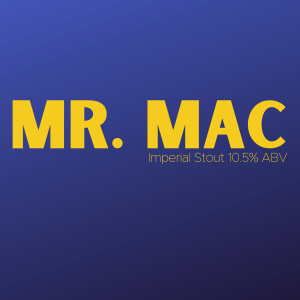