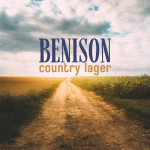 During my time working in Germany, I’d work in the family Brewery 3 or 4 days a week, and then spend the remainder of the time exploring.  I had a touring bicycle named Fandango, a fairly decent grasp of the German language and a love of beer and the brewing culture I was discovering. It was magnificent.

This beer is an attempt to recreate one of my favorite experiences during that time: drinking glasses of lovingly crafted lager beer in small town breweries after a day’s ride. Benison is a word which means “blessing,” or “good thing” – and after a day’s cycling, enjoying a delicious beer in an amazing Biergarten and maybe talking to some locals or fellow tourists was a blessing for sure.

Many of these small town breweries I visited would make only a small number of styles, sometimes only a single beer. I recall one conversation with a server in a brewery taproom that went like this:

Me: Well, what types of beer do you have?

Waitress (laughing): No, no. We have beer or no beer.

What she meant was the options were either order “A beer” or don’t. There was only one type of beer at this brewery.

Me: Very well. A beer, please.

Some of the breweries would make beers they labeled simply as Landbier – which translates as Country Beer (or Country Lager, since these beers were always lagers). Beers labeled thus typically fell somewhat out of the bounds of the prevalent styles of the region. For Benison, we’re doing a more full-flavored variant of the Bavarian Helles, similar to beers I’d run into in very tiny Franconian towns. Benison is a lighter lager, with a hint of amber color from lightly toasted malt. The aroma is of slightly herbal, German hops and honey-like malt. A medium to full mouthfeel has a malty sweetess followed by a soft, balancing bitterness. This beer is full of delicious classic German beer flavor, but extremely quaffable.