Gotahold Brewing Posted on November 30, 2020 Posted in Uncategorized No Comments

I was days away from graduating from my Master’s program when we went to Chitwan National Park in Nepal. We were to float down a river in a locally made boat sourced from a tree, do a safari, and tour an elephant refuge where the first twin elephants had been born just months before. Several of my classmates did not swim and were terrified. I promised on of my cohorts I would sit directly behind her on the boat and having been a lifeguard at one point in my life, promised to safe her if anything went askew.

As we settled into the boat, it felt like we were just inches from the water entering the boat. Even I was scared. That fear amplified when I felt nails digging into my thighs and my classmate barely audible asking, “What’s that?” As I looked in the direction of her gaze, I saw the crocodile sunning on the shore. The reassurance I provided her was not at all what I was feeling inside. Both of us bolted when we got to the destination, thankfully, without meeting any crocs.

I wanted nothing to do with the river after the boat ride. I honestly thought when our professors said we were going to bathe the elephants next that it would be at the refuge. Outside of a zoo, I’d never seen an adult elephant before. So when we started walking that afternoon back in the direction of the river, I was mad! But as we approached the shore and I saw the elephants in the water and the handler as who knows how to swim, my arm shot up and I found myself in the water with these enormous creatures.

They allowed up to climb on and the elephant rose out of the water. You can see my joy in the photo. 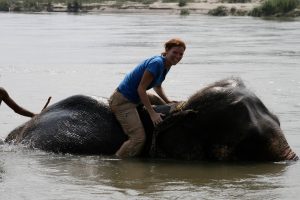 It was scary, amazing, and fascinating to get to be so close. Bathing their bristly bodies was transcending. These majestic animals were the start of a love affair for me. I knew elephants were rapidly declining in numbers and I wanted to do something. I just didn’t know what. 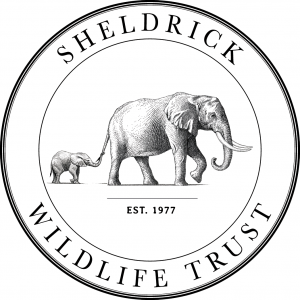 Here’s why we strongly support SWT:

Around 90% of African elephants have been wiped out in the past century – largely due to the ivory trade – leaving an estimated 415,000 wild elephants alive today. Asian elephants are also under threat, having declined by at least 50% in the last three generations. There are only around 45,000 left in the wild.

The Sheldrick Wildlife Trust embraces all measures that complement the conservation, preservation and protection of wildlife and habitats.

Working across Kenya, their projects include anti-poaching, safe guarding the natural environment, enhancing community awareness, addressing animal welfare issues, providing veterinary assistance to animals in need, rescuing and hand rearing elephant and rhino orphans, along with other species that can ultimately enjoy a quality of life in wild terms when grown.

SWT is the organization we are supporting for my birth month. Our goal is to raise $1500.

Our art exhibit is elephants with 10% of all art sold going to SWT. Every Thursday we will donate 100% of our tips to SWT. We hope you’ll come have a beer, buy some art, and tip generously this month.